Andy Crouch came to Northeastern Seminary this past week and lead a conference entitled Culture Making: Recovering our Creative Calling. I had a great time hearing his thoughts and connecting with many church leaders/seminary students. My friend JP, who works for Northeastern, asked that I “live tweet” the event and was glad to spread the inspiring thoughts being shared from Andy and the other teachers.

Culture is the things we make and/or the meaning we make.

But what I would like to focus on are some of the thoughts he shared regarding how we as Christians do/should respond to the culture around us.  Andy suggests that the first four responses below are reactive, whereas the last two are Biblical.

6 Ways to Respond to Culture

One common response from Christians is to “condemn” the world around you. The idea is that the world will continue to morally decay until Christ returns, so we should condemn the culture for everything wrong with it.  Looking back 60 years ago, this would be the common Christian thought.  Christians should not play card games (could lead to gambling), watch any movies, or listen to any music that did not have a Christian label on it.

Another response is to “critique” culture.  This would be similar to that of Francis Schaeffer stance – that Christians should stay at a distance from culture, but can weigh in on the parts of it from a distance.  Andy suggested that you could make a Biblical case for this (as Shaeffer did), but it is not the response that is most true to what Scripture points us to.  Sometimes this is helpful, but often can simply create an “us versus them” mentality (them being our neighbors). 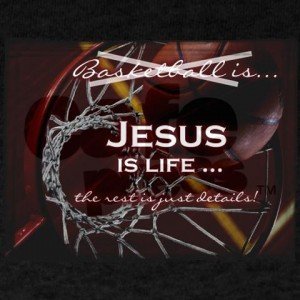 Copying culture is taking what the culture has done and changing it to make it “Christianized”.  I remember growing up there were a bunch of t-shirts that said, “Basketball is life…the rest is just details.”  However, I rocked a shirt that looked similar to this one, saying, “Basketball is my game…JESUS IS MY LIFE!”.  Andy shared that the problem with this response is that often times it is based on a cultural “fad” (he used the example of “Jesus Died for Pedro” – referring to the movie Napolean Dynamite) and that it is often behind the times.  Also, it often times tries to fit the Gospel, or some Biblical truth, into some sort of mold that it doesn’t actually fit into.  It can dumb down the message of truth.

Unfortunately, this is the posture most of us as Americans take today.  From “consuming” at church, to consuming by sitting and watching our televisions at night, we are not reflective upon the things we are filling our lives with.  We simply sit there and are entertained.  We consume culture but we do not…

The idea of cultivating culture, which Andy Crouch suggests is the more Biblical response to culture, comes from the original Garden of Eden story.  In Genesis 2, the job that God gives to Adam is to “till the land, plant it, and keep it” (vs. 8, 15). The original job of mankind, before the Fall, is to cultivate.  The other Biblical response is to…

Out of the ground the Lord God formed every animal of the field and every bird of the air and brought them to the man to see what he would call them; and whatever the man called every living creature, that was its name.” Genesis 2.19

The Creator gives his creation the ability to re-create. Adam creates names for all the creatures – and God gives him full control of this. As I tweeted from the conference: “In Genesis 2, Adam CULTIVATES the Garden and CREATES names for the animals. This, Crouch says, is the only way to change culture.”

What do you think? Is it a worthwhile endeavor to try and influence culture? What’s your posture towards culture? What is the most “Biblical” response to culture?