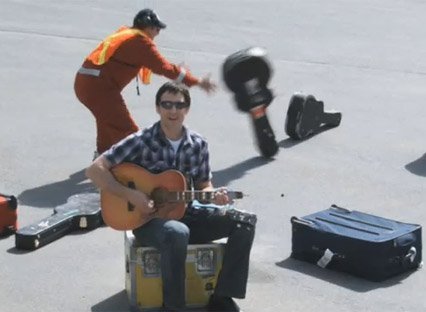 Want to hear a hilarious story (and proof of the extremely different world we live in?)?  Roy Williams tells the story of Dave Carroll below:

A musician named Dave Carroll recently had difficulty with United Airlines. United apparently damaged his treasured Taylor guitar ($3500) during a flight. Dave spent over 9 months trying to get United to pay for damages caused by baggage handlers to his custom Taylor guitar. During his final exchange with the United Customer Relations Manager, he stated that he was left with no choice other than to create a music video for YouTube exposing their lack of co-operation. The Manager responded: “Good luck with that one, pal”.

So he posted a retaliatory video on YouTube. The video has since received over 7.5 million hits. United Airlines contacted the musician and attempted settlement in exchange for pulling the video. Naturally his response was: “Good luck with that one, pal”.

Taylor Guitars sent the musician 2 new custom guitars in appreciation for the product recognition from the video that has lead to a sharp increase in orders. Here’s the video…

I’m not so convinced on the “increase in orders” for Taylor guitars because of this video, but I am completely convinced this is hilarious.  A little passive-aggressive, but funny nonetheless.  Since I received some criticism for my lack of country love on facebook today, I thought it would be worth it to post this.   Thanks for the find, Ryan.