I’ve been reflecting a lot on the mega-churches.  Two of my family members are employed by a mega-church with many campuses all over suburbia Detroit.  My cousin, Ian, who is a video-making prodigy, does all kinds of amazing videos that inspire the 11,000 people that attend their different church campuses.  My aunt is on a team of people that writes curriculum for the kids at the church.  That is crazy that there is a team dedicated to just writing kids curriculum!

And I’m not going to sit here and bash mega-churches for their rock star approach to their services.  Whatever.  They are reaching tons of new people, and although I think they are normally just feeding our desire for an entertaining Jesus, the relationship and true transformation of followers is much more difficult at these large institutions.

You may have heard last year that Bill Hybels, pastor of one of the nation’s biggest churches in Chicago, announced that after receiving market research on it’s congregation (which is crazy that a church is paying thousands of dollars for market research…), most people were not becoming devoted followers of Christ.  They had a huge revival and tried to revive their mission of “Turning irreligious people into fully devoted followers of Jesus Christ.”  I thought that this was great.

So what is making these mega-churches so successful?  They are doing things differently.  My cousin was saying how they create these incredible videos that are made to a click track that the band plays along with.  A click track is essentially a metronome that the band is listening to and is correlated for the entire “worship” time.  So much for spirit-lead worship!  And I am definitely no charismatic, but to have every little detail structured from the time people walk in the door until the time they leave just seems a little ridiculous to me.

And so Ian was telling me how hard it is to balance things at a mega-church.  On one hand, he is proud that the videos, music, and all other entertainment during the service is just as good as anyone is doing in the mainstream.  Heck, the church I went to in Pittsburgh was using an old camera from NASA spaceships!  But what happens when we have this “excellence” in churches?  It becomes a 55 minute Jesus-show rather than a time of coming together to serve and learn about Christ. 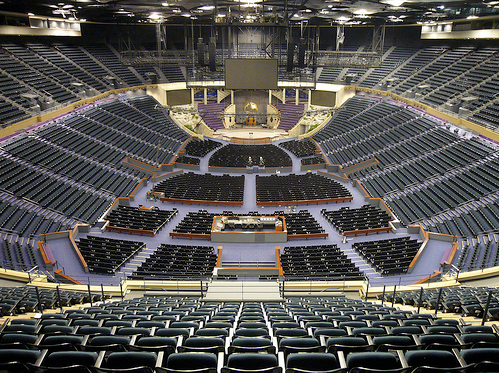 So how do these mega-churches respond to this criticism?  They rely entirely on small groups.  And they run these small groups very well.  They use solid content and use creative means.  I mean heck, if you can invest $73 million in a building that is the largest theater in the nation, you can find some people to make some good, freakin’ small groups.

So I’m sure it’s clear that I am unenthused at how these churches are spending their money.  Yes, that is true.  However, the practicality of how this ends up consuming so much time is what is crazy.  We will use the church my family is employed by as an example, which seems to be the same structure as most mega churches.  They use their Sunday mornings as “outreach”, mainly focusing on sharing the Gospel, but talking about different things too.  Wednesday is for your actual “going deeper” time – in depth Bible studies and actual songs that are directly to God, rather than a Linkin Park-type song you would hear on a Sunday morning (which I actually have no problem with considering who writes our normal praise songs).  If you have kids, they probably meet on a different night, and then you have your small group night.  That ends up being 4 gatherings at church per week, and that is if you are not volunteering for some other ministry!  That’s a heck of a lot of a time commitment.

But most people just come on Sunday morning to these places, get their fill for the week, and move on.  But what if instead of all those other nights in the week (which are all legitimate ministries), people were “doing” things for Christ.  For too long, the church has been focused on bringing people to it, rather than bringing it to others.  And I think most followers of Christ recognize this, but don’t know what to do with it.

Rather than giving your money towards a huge, new, and beautiful facility, what if you gave towards a greater need in the world?  What if rather than spending 4 nights a week at every gathering offered by the church, you actually made a weekly visit to the local homeless ministry or went every Wednesday night to a nursing home and developed relationships with the elderly?

I just hate to see us wasting time, and I know that I fall into this trap all the time.  I’ve been involved in every ministry that a church has to offer and I think that all have their place.  I suppose this is a call for us to be doing more with our hands and less with our comfortable, sit-in-a-chair-and-be-spoon-fed mentality that so often engulfs us.