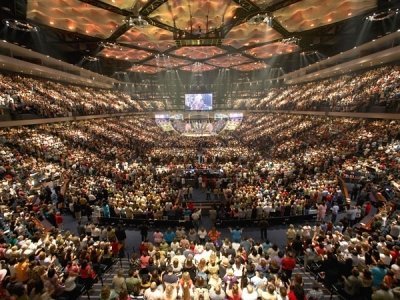 Ask someone who has been following Christ for a good amount of time and I’m sure they will have some opinion on the mega church.  Some believe it is fantastic, others might as well think that it is from the devil himself.  Let’s start with my history and move to looking at some positives and negatives of the mega-church movement.

I’ve grown up going to what I would call very large churches, but not mega-churches.  The size of the congregation (or people who call themselves members) was usually around 1,000.  These churches have a lot of the same characteristics of a mega-church (mega-churches have 2,000 or more on a given Sunday morning), but usually do not do their productions on quite as big of a scale.  I also went to a church in Pittsburgh for 2 years that would be considered a mega-church.  All of these institutions were doing some great things for God, no doubt in my mind.

However, if you have ever talked to me (or read my blogs), you probably recognize that just doing some good is not enough.  I believe that people like James Dobson and Jerry Falwell have done a lot of good, but have also left behind huge messes for us to clean up.  The same could be said of the sad Ted Haggard story, or even my story.  But I’m not talking about sin corrupting what we are doing, just misplacing our focus.

Take for instance this Christmas season.  I went to the largest mega-church in the area and watched their Christmas production.  And a production it was indeed.  I was sitting in theater-type seating watching these phenomenal musicians play Christmas and worship songs.  As in every mega-church I’ve been to, the whole room was black with cool lights shining on the stage.

But I couldn’t worship.  I kept waiting to see if Coldplay was going to come out and play “Viva La Vida”.  These lights that decorated the room had now turned into spotlight style lights shining on the congregation as we tried to worship to today’s trendiest worship songs.  Of course, there were videos galore and the pastor was young and hip.  He did the usual structure of using a visual aid and funny story to then transition into the serious message (I have no problem with this, it’s just very predictable).  And here was another thing.  Not only was a ridiculous amount of money spent on all of this “stuff” everywhere, the visual aids they used were crazy.  Now it wasn’t as far as Joel Osteen goes, in bringing a real-life elephant on stage (Really?), but the pastor used a front load washing machine that was the nicest machine I had ever seen.

So what?  Why does that matter?  It really doesn’t.  But what that represents is the larger picture.  These churches are reaching out to rich suburbia and playing into the entertainment-crazed culture we live in.  Rather than reaching out to the lowest of lows like Christ and trying to make them feel comfortable, the entire culture of these mega-churches of ridiculously priced [insert everything there] is poor stewardship.

But shouldn’t each church have its own target market?  Shouldn’t the rich people have a place to go too?  Yes!  And don’t get me wrong.  This church is giving away thousands of dollars to needy people all over the world.  I understand that it is hard to balance investing into your building here and giving to those in need.  And Christians are giving loads of money to these mega-churches and I think that is good too.  So my first question asks if these large institutions are honoring God with their money as best as they can?  They have obviously been blessed more than most churches and therefore have a greater responsibility.  I would say that less money should be spent on flashing lights into my eyes and video cameras and more should be spent on giving clean water to African communities.  However, if the church had not created a setting like that and the visual stimulus like they have, would they have had 8 packed out Christmas Eve services in a facility that seats around 2,500?  No they would not have.

So where does the problem lie?  With followers of Jesus Christ.  America’s Jesus is again too commercialized and entertaining.  The question I always ask myself when going to a new area and finding a new community of believers to get plugged in with is, “where would Jesus go to church if he lived in ______”.  I just always get this feeling that He would want it to just be simple.  He wouldn’t need 6-8 cameramen walking around filming all sorts of cool “rock” angles behind the words.  He would not need stagehands for a church service.  We would be able to tell a difference between a rock show and our local church.  Our entertainment and worship have become too intertwined and we must get back to a simple Jesus.

8 responses to Oh The Mega Church