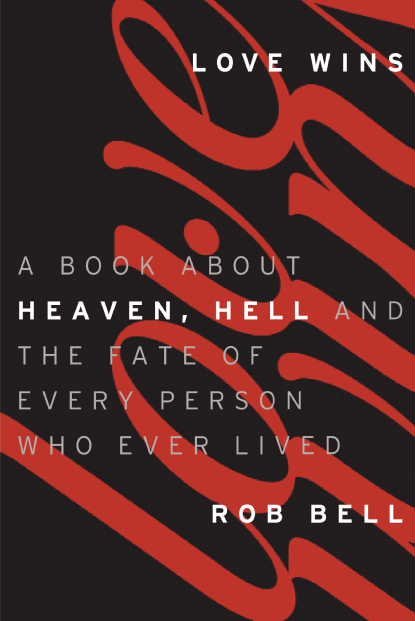 3 months ago, I wrote a blog post on Rob Bell’s new book, “Love Wins“.  What I said in that post (essentially) was that there were some indicators that Bell was going to say that everyone was going to Heaven. I’m not comfortable with this idea, but I was comfortable with the main idea of his sermon on the topic where he stated that, “The cross is God’s way of saying, ‘Love Wins.’”  I left my full endorsement of the book OR writing it off completely, to wait until I read the book.  That seemed to make the most sense.

So I figured this would be my last thoughts on the matter until reading the book that releases next month UNTIL Rob Bell became a trending topic on twitter Saturday night.

Do you know how difficult it is to become a trending topic on twitter?

You have to start a revolution in Egypt. Or have a huge show like The Grammy’s or the Oscars. Or be Justin Bieber and get a haircut.  But these are (typically) the only ways you get to be in the top 10 talked about things on twitter at a given moment.

So how does a Christian writer, who did not say or do anything on the internet on Saturday night (nor participate in any scandal), get propelled to such a highly talked about topic?

By having John Piper bid you a goodbye.

If you are unaware, John Piper is a conservative, Reformed pastor at a large church in Minnesota.  Piper tweeted “Farewell Rob Bell” along with a link to Justin Taylor’s post on Bell (Justin runs one of the most prominent Christian blogs on the web and is the VP of editorials for CrossWay).  What Justin says in reference to Rob Bell is:

It is better for those teaching false doctrine to put their cards on the table (a la Brian McLaren) rather than remaining studiously ambiguous in terminology.

So on that level, I’m glad that Rob Bell has the integrity to be lay his cards on the table about universalism. It seems that this is not  just optimism about the fate of those who haven’t heard the Good News, but (as it seems from below) full-blown hell-is-empty-everyone-gets-saved universalism.

Sounds fair, right? If someone were to question orthodox Christianity and say that no matter what, you go to Heaven, this would be a problem.  And probably an interesting blog post.

But this wasn’t what actually happened.  Rob Bell never made universalist claims (even if he intentionally flirts with the idea – this is what the world calls “marketing”), yet was called a false teacher before Justin even read his book.  In fact, he even whipped out the Corinthians verse about “Satan masquerading himself” and that his servants in the end will “get what they deserve” (2 Cor. 11:14-15) when referring to Bell.  Yikes. To watch a video on a dude and jump to servant-of-Satan is a big jump (verse is now removed due to complaints). And it’s an even bigger jump for Justin, who openly admits in the post to reading snippets of the book and the publisher’s note, who he says is not even written by the author.  He also said he watched the following video, which “shows that [Bell] is moving farther and farther away from anything resembling biblical Christianity.”  Here is that video:

So, as a result of this nonsense, here are my thoughts:

1.) It’s scary what Piper can do with a tweet. I mean think about it – a Christian book being that highly talked about online is crazy.  There’s 25,000 facebook recommendations & over 1200 comments.  Those numbers don’t even include blog posts or twitter.  That’s nuts.

2.) Rob Bell loves controversy. I wrote about this in my last post and essentially what I said was that Rob Bell frames questions to make us uncomfortable.  He did it with the Virgin Birth in Velvet Elvis and he did it with his other titles in Sex God or Jesus Wants to Save Christians.  Now normally people who start up controversy annoy me, but in Bell’s case, I think he ends up creating very meaningful conversations about a difficult topic.  Which leads me to the point that…

3.) Universalism is one of the biggest questions being raised in Christianity today. People (reasonably so) are uncomfortable with thinking that people like Ghandi or Anne Frank are burning in hell forever (as Rachel Held Evans pointed out today).  I think it is quite OK to question that and I think that should make us as Christians a little uncomfortable!  And what if we as Christians were more offended by the idea of everyone going to hell than everyone getting into Heaven?

4.) Maybe there is room for latitude in Christian thought.  It was annoying to see Justin Taylor/John Piper make such bold statements about how certain they were that they were right.  This is annoying in and of itself, but when it is paired with an assumption and not a full reading of a text, the annoyance level raises substantially.  What if a Christian didn’t HAVE to be Reformed and believe in predestination? What if you could be an Arminian and believe in free-will?  Or what if you could be a Roman Catholic and still inherit the Kingdom of Heaven?  Or what if you could be a peace-lover, or a Pentecostal, or a female pastor?  I could be reading this wrong, and as Jason Boyett pointed out, I hope I am wrong.  But the arrogance in the Christian Right is getting old.

5.) Shame on us as Christians.  Haven’t we done this before?  Beaten each other up over a false assumption?  I liked what Scot McKnight had to say:

Frankly, John Piper’s flippant dismissal of Rob Bell is unworthy of someone of Piper’s stature. The way to disagree with someone of Rob Bell’s influence is not a tweet of dismissal but a private letter or a phone call. Flippancy should have no part in judging a Christian leader’s theology, character or status.

My friend Chris tweeted a song from old school Relient K called “Down in Flames” that I think wraps this all up the best:

Christians– we’re all afraid of fire.
We prefer to suck on pacifiers.
Baby pacifists, we’re throwing fits.
We don’t shake hands, we shake our fists.

We’re cannibals.
We watch our brothers fall.
We eat our own, the bones and all.

Finally fell asleep on the plane
to wake to see we’re going down in flames.

We see the problem and the risk,
but nothing’s solved.
We just say, “Tisk, tisk, tisk,”
and, “Shame, shame, shame.”

Christians– we mourn, the thorn is stuck
in the side of the body watch it self-destruct.
The enemy is much ignored
when we fight this Christian civil war.

We’re cannibals.
We watch our brothers fall.
We eat our own, the bones and all.

Finally fell asleep on the plane
to wake to see we’re going down in flames.

Let’s extinguish the anguish
for which we’re to blame,
and save the world
from going down in flames.

Let me pause to clarify
(’cause I’m sure you’re asking, “Why?”).
I stand before you and proudly claim
to belong to what this song complains.

I’m part of the problem,
I confess,
But I gotta get this off my chest.

Let’s extinguish the anguish
for which we’re to blame,
and save the world
from going down in flames.

“The enemy is much ignored when we fight this Christian civil war” indeed.

What do you think about the “controversy” or the idea of universalism?