11 Questions To Ask When Creating a Church Facebook Page 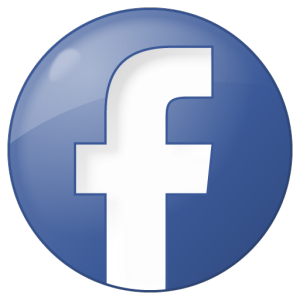 Facebook and social media are an incredible way to stay connected to your church family. It also is a great way to create content that can help you to reach out to your community that is disconnected to God. At our church, we have had many visitors come to our church through engaging Facebook posts. One student in our student ministry came and checked us out as a result of our youth ministry page and months later gave his life to Jesus. He is now in Bible college! Our church actually helped find candidates for open positions we were hiring for through Facebook promoted posts in our area.

To give you an idea of the reach of the social media giant, as of the first quarter of 2015, Facebook had:

To put things in perspective, Facebook now has more active users than China’s entire population (estimated to be 1.40 billion).

So what are the questions you as a church need to ask? I have compiled the best 11 questions to ask to have a great launch and continued strategy for engagement for your church Facebook page.

6)      Who else can we get involved to help create content?

7)      Who can we get to commit to engage with the page (not managers of the page, other users)?

8)      Who will respond to comments and keep others engaged?

9)      Who is willing to do some of the graphic work to make the page look nice?

11)    How can we ensure this will not fall off someone’s plate? How can you ensure someone will be creating meaningful content long term?

Although this may seem like a lot of work at the start, the potential upside is incredible.

Note: I recommend applying these same principles to other social media platforms as well. 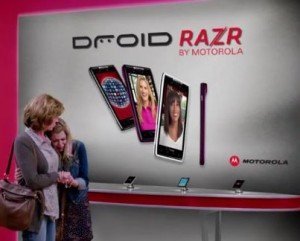 I’m not sure if it’s that I only watch my tv shows on Hulu and they only rotate 7 advertisements per year (seriously, Hulu!), or what it is, but after watching the Verizon commercial with the crying Mom try to leave her daughter for the 400th time, it is getting rough for me. In fact, I walked out of the room last night watching it with my wife because I couldn’t take the same ad one more time.

And maybe I’m crazy, but this experience did get me thinking.

In our churches, how often do we “over-saturate”?

Do we over-sell every event or activity the church puts on?

Do the words “life-change” flow out of every announcement we give?

Do we over-hype programs rather than invest in individual stories?

Are we saying the same thing over and over?

Are we driving our church members *crazy* because we continue to over-hype and under-deliver on our promises?

Maybe it’s just me, but I don’t want to be that annoying advertisement for a church function. But I do want to build buzz for what God is doing. Because I believe more than ever that He is active in our world.

What do you think?

5 Church Communications People You Should Be Following 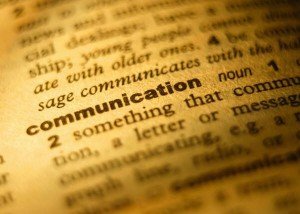 Today I aim to connect church communications people with one another.  This is a broad field and looks different in each church, but plays an important role in getting out the name of Jesus. Check out this list below…

Even if you are offended by their URL, you will quickly find that their content is extremely helpful for spurring your communications forward.  In fact, their mission is to “to frustrate, educate and motivate the church to communicate, with uncompromising clarity, the truth of Jesus Christ.” And they do just that.

Kem is the Communications Director at Granger Community Church and advocates for “Less Clutter” & “Less Noise”. She even wrote a book about it, with the tagline, “Beyond Bulletins, Brochures, and Bake Sales”.  You can read the cliffnotes to her book here (which I think will spur you on to buy her book!).  Kem is great and worth a follow.

Brandon is the communications director for Saddleback Church (Rick Warren’s church) in California.  He is also END_OF_DOCUMENT_TOKEN_TO_BE_REPLACED

Yes, you read that correctly.

This is the Rally to Maintain Division.

You see, a FORMER favorite author of mine, Rachel Held Evans, is pulling together Christians from every “sect”  of our faith to try to unite us all in Christ.  Now this seems great to most Christians.  But I LOVE division. No, not the kind of division that respects people for their theological differences; the kind that helps beat up our brothers in Christ.  The kind of Christianity that says, “I’m right, you’re wrong, now get out of my church.”

So maybe you heard about Jon Stewart’s “Rally to Restore Sanity” last October. Just as soon as Jon Stewart made his announcement, Stephen Colbert came back with his announcement for his “Rally to Restore Fear.”  His desire was to restore fear back into American politics.  And 200,000 people showed up on the Washington mall.  And Stephen won. For sure.

So now that Rachel Held Evans has publicly admitted to stealing this idea and putting a “Christian” spin on it, I am the Stephen Colbert to her cause. She thinks she is doing us all a favor by trying to unite us.  Well I call her bluff.  And even if I’ve recommended everything she has ever written before, I am now calling ALL of us as Christians to KEEP THE HATE ALIVE! (*Insert rally chant*)

Oh. I should also mention she is doing this entirely for selfish purposes.  She says she is raising money for Charity: water to try to show we can put aside our differences to help people in need. But I’m sure it’s all a publicity stunt. It always is from people like her (*insert fabricated story about her*).  I think pulling our resources together to help people in need is ridiculous and that we should just argue about useless theology all day.

That’s a cause I could get behind.

And thus the birth of the Rally to Maintain Division.

See the pictures below and further instructions: 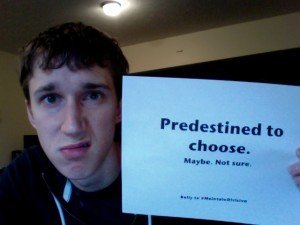 “Predestined to have a choice?” 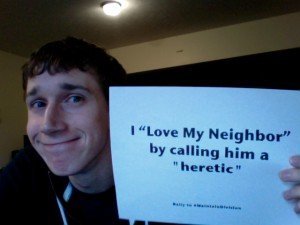 So much easier than healthy dialogue. 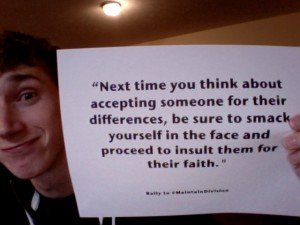 “Next time you think about accepting someone for their differences, be sure to smack yourself in the face and proceed to insult them for their faith.” 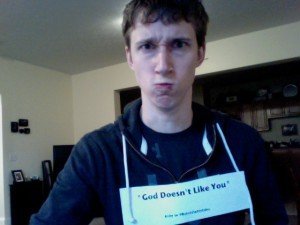 New sweatshirt I custom made: “God Doesn’t Like You!” 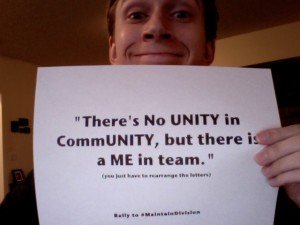 “There’s No UNITY in CommUNITY, but there is a ME in team.”

You just have to rearrange the letters and it’s all about ME! 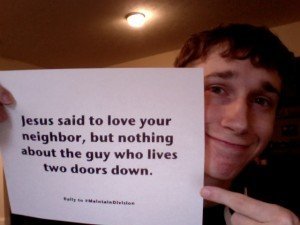 Jesus said to love your NEIGHBOR, but nothing about the guy two doors down. 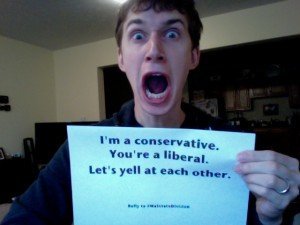 I’m a conservative. You’re a liberal. Let’s yell at each other. 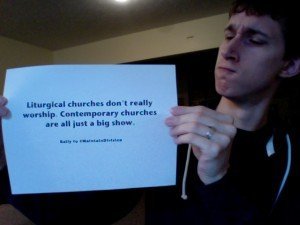 Jesus is a Democrat. (or a Republican…whichever one drives you more crazy…but he is definitely in a political party).

Let’s go back to the good ole days…when people didn’t use drums to “praise God” and the organ cost more than most homes. Worship wars must live on!

“I Use Controversy To Stir Up Dissension” 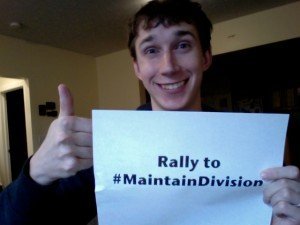 So here’s your instructions:

1.) Post your own picture of how you are Rallying to Maintain Division. Or write something in the comments about how we can keep division alive!  This is the best cause I’ve ever been a part of.

2.) Write your own response of how we can keep division alive. Either in the comments here, your own post, or on facebook or twitter.  This needs to go viral.  This is the most important cause you could ever be a part of.

4.) If you are a complete nut job and think Christians should pull together to battle injustice, love others, and show Christ to people, then go give to Charity: water. But only if you are crazy.

But if you are with me in battling against crazy liberal-conservatives like Rachel Held Evans, then join the battle!

I feel inclined to add that this is all a big joke.  This is satire and meant entirely for fun. It is never a good idea to not be unified. So let’s keep this light-hearted and fun. Thanks!

What Dominos Pizza Can Teach Us About Our Faith 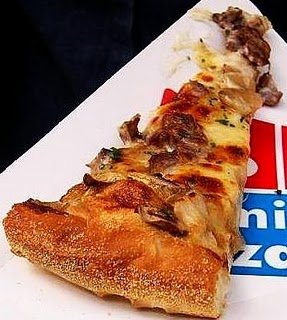 Being boldly honest is something that you can take a lot of heat for.  You’ll hear critics say, END_OF_DOCUMENT_TOKEN_TO_BE_REPLACED

The Problem with Pastor as Rock Star

Woah. This article by Ed Stetzer was too good not to be reposted.

I love that my pastor intentionally does things to make sure he isn’t made into a rock star.  It’s an impressive balance he walks (since everyone loves him), yet he never utilizes his influence to turn himself into something that is unhealthy.  It’s refreshing in today’s church.

Check out the article here at Catalyst Leader.

The list below was compiled by Youth Specialties.  These thinkers and practitioners have been huge in my personal growth and understanding of what it means to be an effective leader for young people.  Check it out!