Nearly every time I am driving through a new city, I check out the different radio stations.  Of course it is all the same (and usually about the same place on the dial).  You have the rap station up in the 106 frequency, country at 105/103, top 40’s music around 101/96, Christian around 90, and indie or jazz at 88/89 on the FM dial.  I throw that out there just as information for the next time you go to the next major city as a general guide, but it also serves my first point: radio is so predictable. 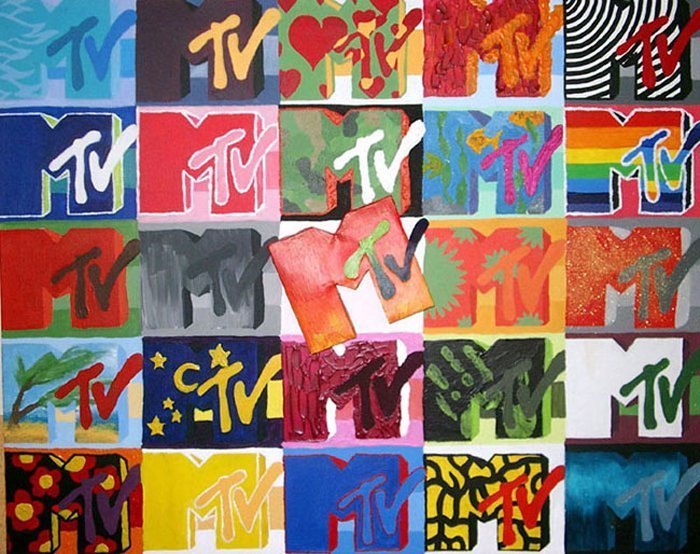 MTV killed the art of music.  It took what used to have to be pictured and turned it into a visual platform.  It is like when a children’s book, such as Chronicles of Narnia, gets turned into a movie and a child no longer has to make up a picture of Aslan (not that I did not enjoy the movies, just saying…).  The imagination and open-ended side to the songs is now gone.  That is what makes music good though!  That ambiguity that allows you to identify with the song with where you are at and how you are feeling makes for a beautiful interpretation.  Since every teenager has raging hormones that they do not know what to do with, MTV plays videos that play to their desires (well…they used to play music videos anyways).  Don’t worry, I’m not insulting your intelligence by stating we live in a culture plagued by sex, it is just that when I went to MTV.com earlier today, I found this on the side panel: 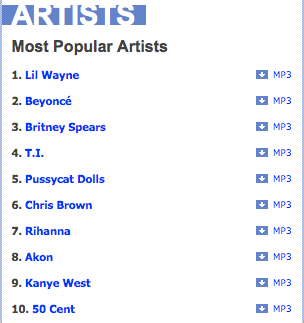 Every single artist in the “Most Popular Artists” at MTV is driven entirely by sex appeal.  100% of them!  Let me start by ripping Lil Wayne a new one. First off, I have yet to hear an impressive rap from him.  His little laugh pisses me off every time I hear it in his songs because I know it is just him chuckling at his latest promotion of some sort of sin.  His latest video can be found here where the entire premises of the song is about how a female officer pulls “Weezy” over and ends up sleeping with him (oh yeah…handcuff references, “beat it like a cop”, softcore porn and all).  Then we have the rest of the artists: Pussycat Dolls are just skanks dancing around to a pop song, Kanye wanted to be back in the news and so he just announced in Vibe that he would be posing nude soon, 50 cent’s first single says in the chorus, “I’m into havin sex I ain’t into making love, so come give me a hug, if you’re into gettin’ rubbed”, Britney is known as the sex symbol of our day, and the list goes on and on.  And Akon?  My goodness.  I don’t even know where to start there.  There is a video of him humping a girl onstage at a show (found here) that is likely an underage girl.  I was actually surprised not to see T-Pain on the list for all of his wonderful songs including his new one with Ludacris called “Champagne” that basically says, “if I get more drunk and have beer goggles, then I will sleep with you.  Otherwise you are not hot enough…so pass me another cold one!”

And of course I could go on and on.  It probably is no news to anyone that sex is what is driving the music industry (but maybe how bad it has gotten is new information).  Our only good news right now is that MTV no longer is playing music videos, they just have terrible teeny-bopper reality shows.  I’m not one to normally be an advocate for Christian music either, but when it comes to our youth, we’ve got to be feeding them better stuff.  Some day I’ll write a blog on music to recommend to your kids, but start by just letting them listen to some good music.  Start with the Beatles and move to something like Coldplay.  Unless they are already listening to Casting Crowns and Chris Tomlin, don’t make them listen to that.  If you ever force your kid to listen to music, the battle is already over.  They WILL go find worse music than you are preventing them from listening to, so ease off the pedal a little and let them listen to music that doesn’t just talk about God.

But enough of my advice on parenting since you probably don’t care.  I digress now to my second beef of the day: Christian radio.  Remember that story I started off with scrolling through the dial in new cities?  Well every time I do, before I even hear words said, I can tell which station is the Christian station (and so can all my friends).  It is overly compressed, overly simplified pop songs.  You are going to usually start with a pop-rock intro, bring down the music for the verses, followed by a musically big chorus.  Music industry executives mock Christian music and followers of Christ for how terrible the music is.  Most Christians do not understand why this is, because they enjoy it.  I have no problem with you enjoying whatever it is you like, but let’s just take a look at the top 40 songs found this week on the local Christian station here in Lancaster (which as far as Christian stations go, is fairly progressive, but definitely not leading the way either). 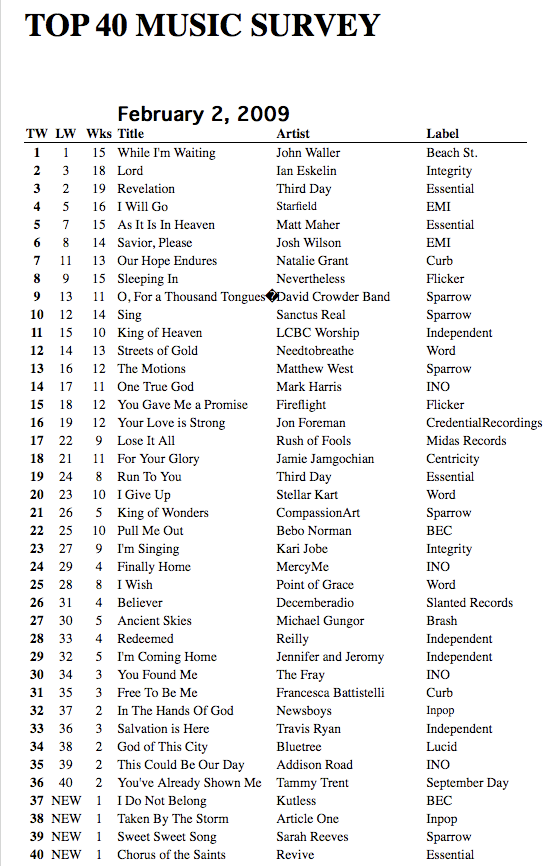 I don’t normally listen to Christian music just to relax, but I do enjoy it for purposes of praising God.  I actually love worshipping God through music and connecting to Him in that way.  I made the claim earlier though that traditional Christian music (and that which is played on the radio) all sounds the same.  Take a listen for yourself:

Song #1: “While I’m Waiting” by John Waller.
Theme: Wait on the Lord.
Musically: Soft verses, growing pre-chorus, big chorus.
Links: Video/Song
Review: I actually like this song, except that it sound the exact same as every Chris Tomlin track…

Song #2: “Magnify” by Ian Eskelin (A google/iTunes search shows nothing for the song “Lord”, so I went with his other single)
Theme: God is all you need
Musically: Soft verses, growing pre-chorus, big chorus.
Links: (wow…so terribly simplistic) Lyrics
Review: My 12-year old cousin could’ve written something to make me think more than that.

Song #3: “Revelation” by Third Day
Theme: God, show me the way
Musically: Soft verses, growing pre-chorus, big chorus.
Links: Unofficial video and song
Review: I don’t like Third Day’s sound, but it is at least a unique voice to change up the sound.

Song #4: “I Will Go” by Starfield
Theme: I will go where God leads
Musically: Big intro, soft verses, big chorus.
Links: Video and song
Review: Musically at least it has a slightly interesting riff with the tension in the guitars, but the “Where You lead me” song is SOOO overdone in the Christian market.  Songs with the exact same lyrics: MercyMe’s “Go” or “Where You Lead Me”.

Song #5: “As It Is in Heaven” by Matt Maher
Theme: Let Your Will Be Done
Musically: Soft verses, growing pre-chorus, big chorus.
Links: Video, song, and lyrics
Review: Although he repeats, “I will sing a new song” repeatedly (which in and of itself is an oxymoron in my mind), he quotes Scripture throughout.  Quoting Scripture can be very good for worshipping because you know you are singing God’s inspired Word right back to Him.  However, to use this same language of “the rock’s cry out” or repeating an overused phrase is tough for me to feel like I am using any creativity in praising my Savior.  Is it all about creativity?  Not at all, but it gets back to the idea of the song, “I Am a Friend of God”.  Repeat that phrase over and over for 6 minutes is not a way I desire to worship God.

So here is the deal.  I could go down the rest of this list and it ALL would be the same.  And that is the point.  Every song sounds the exact same.  This frustrates me.  How do you respond?  Well, it’s up to you, but I choose to listen to quality music.  What makes quality music?  Music that is both creative and glorifies God.  Top 40 music is unholy, but so is Christian radio.