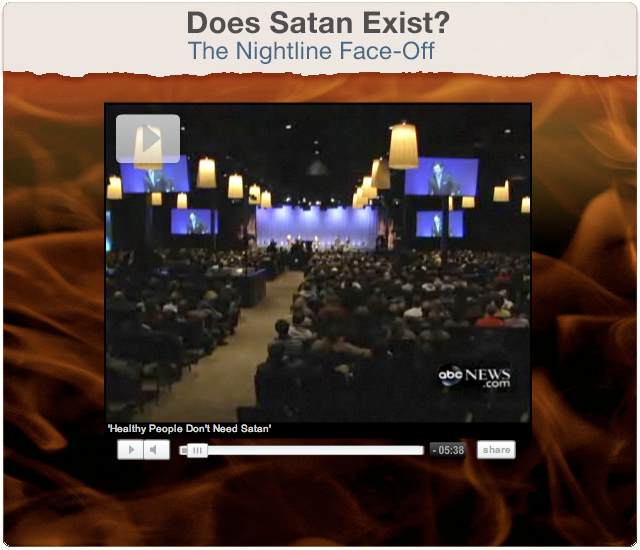 Airing as a special on ABC a few nights ago, different thinkers gathered to discuss the existence of Satan.  I found the discussion pretty interesting (although I will warn you it is long).  Many of my readers who are followers of Christ might be quick to jump on the “truth” coming from Mark Driscoll, but each member says things that point away from the truth and each of them has something to say that points towards the truth.

Click here to begin listening. My thoughts for how it relates to me are as follows:

Let me just start by saying that since the fall of Ted Haggard, it seems that the major leader of the Evangelical movement seems to be Mark Driscoll.  I have a lot of problems with Driscoll and some of those come to surface here, but I won’t touch on those for now.  The things I agree with Driscoll include the basics – the story of Satan being literal (although I am not a literalist for all of Scriptures by any means), as well as Jesus being our rescue from this world.  I also agree with Driscoll’s message of free will and that God gives us the choice whether or not to love him, which is how Driscoll explains why God set up the world the way he did.  My biggest problem with Driscoll in this video is in one of the video segments where there is arguing and debating.  Unfortunately, Driscoll puts off an aroma of arrogance through his jokes and body language.  I see this so frequently with my fellow Christian brothers and sisters.  We get this arrogance about having the truth (as we so perceive it) and if anyone thinks differenly from us, we are entitled to condescendly talk to them as if we are above them.  Not good.  Also, when challenged, Driscoll is quick to jump on the “you’re judging me” phrase, which is a terrible cop-out in my mind.  Of course I have differences theologically from Driscoll as well (he is a Calvinist and does not believe in the equality of women in churches), but the point is that he does bring the basic truth of what Christians have always perceived of Satan, and there is a lot of truth he speaks that I can not simply discount for his lack of tact or differences in theology.  Thanks Mark.

The Bishop in this discussion is a former fundamentalist preacher who ends up having to walk away from a lot of his faith because he realizes that a lot of it is a hoax.  I think he misses the mark sometimes, but I am drawn to the Bishop’s skepticism, specifically in the “casting out demons” section.  He talks about how sometimes people come to him and are looking for a specific solution and so he gives it to them.  It reminds me of Benny Hinn and how there are a few people who are actually healed (and probably supernaturally), but how so much of it is just fake.  I really liked the Bishop and his perspective on the evil forces.

Annie runs a ministry called, “Hookers for Jesus” and tells some compelling stories of how she was raped by multiple men and in some horrible, nasty, disgusting situations, but that God brought her out of the miry clay.  It was an amazing story of God’s grace and I was definitely moved by it.  However, Chopra and the Bishop’s point that Annie had to take responsibility herself to get her out of the situation was very valid (and she agreed).  What I take away from Annie is that she was not as much interested in the facts, but more that she had actually experienced God.  Although this is the kind of thing I normally struggle with in people’s faith, it was a good reminder that our emotions and spirituality are connected and that there is something about the Bible that moves me more than any other book.  I think that Annie loses in the theology sense of this conversation and descriptions of demons, but wins with her compelling story and more importantly, what she is doing to help other women get out of that situation.  Awesome!

I think it is easy for Christians to quickly write off Chopra here, since he uses different linguistics and descriptions than the others on the stage.  However, Chopra’s message has a lot of truth.  Areas I agree with him: We need to take ownership of our actions and not peg it on the devil, there is a cycle of thinking that people fall into when believing/following the evil forces, the troubles/wars of the world being largely because of religious indifferences, and the value of the mystery of God.  These are all big points that come from Chopra that we can pull truth from.  The point I definitely would advocate my readers to think about is the mystery of God.  We all say that God is mysterious, yet we put him into our own box.  My challenge, which was also one from Chopra, is that we all think about the places we have limited God and the places of mystery that make it so that we must choose to just have faith.  Faith is where the buck stops.

I think that Satan is a literal, fallen angel.  However, I honestly have no idea if that is the case.  I know the popular thing to do is to align yourself with different thinkers, but I just don’t know.  The whole story of Satan could very well be just an analogy, but I do definitely believe in Good forces and Evil forces in our universe.  I thought that the moderator did a great job of challenging each member’s thoughts and bringing up a lot of questions that come from subscribing to any sort of view on Satan.  I hope you grow in your understanding of these evil forces and continue to combat them with good in your own life.