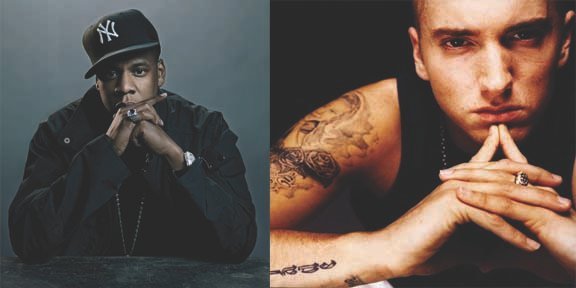 Most scholars in the world listen to both their followers and their critics.  Since most of my followers are not into rap (and if they are, definitely not mainstream hip hop), I decided to share a song that has challenged my faith, despite it being loaded with swear words.  The song title is “Renegade”, rapped by Jay-Z and Eminem, who are two of the most successful rappers to ever have lived (and deservedly so I should add).  So, whether or not you like rap music is irrelevant – let these words sink in.  What is God trying to tell you through people that do not profess to be followers of Christ in any way?  Since Eminem focuses his two verses on how he has been successful and his problems with religion, we will focus on his words instead of Jay-Z’s.  Lyrics are in italics.

You can stream or download the song here: “Renegade”

[Eminem]
Since I’m in a position to talk to these kids and they listen
I ain’t no politician but I’ll kick it with ’em a minute
‘Cause see they call me a menace; and if the shoe fits I’ll wear it
But if it don’t, then y’all’ swallow the truth grin and bear it
Now who’s the king of these rude, ludicrous, lucrative lyrics?
Who could inherit the title, put the youth in hysterics?
Usin’ his music to steer it, sharin his views and his merits
But there’s a huge interference – they’re sayin’ you shouldn’t hear it
Maybe it’s hatred I spew, maybe it’s food for the spirit
Maybe it’s beautiful music I made for you to just cherish
But I’m debated, disputed, hated and viewed in America
as a motherf**kin’ drug addict – like you didn’t experiment?
Now now, that’s when you start to stare at who’s in the mirror
and see yourself as a kid again, and you get embarrassed
And I got nothin’ to do but make you look stupid as parents
You f**kin do-gooders – too bad you couldn’t do good at marriage!
(Ha ha!) And do you have any clue what I had to do to get here I don’t
think you do so stay tuned and keep your ears glued to the stereo
Cause here we go – he’s [Jigga joint Jigga-chk-Jigga]
I’m the sinister, Mr. Kiss-My-Ass it’s just the

Wow! Whenever Eminem gets serious, he can spout out some pretty intense stuff.  In the midst of his rage though, there is truth, and that is where we must reflect.  Focusing on the second half of this rap, Eminem frames it first with “But there’s a huge interference – they’re sayin’ you shouldn’t hear it” and gets listeners to sympathize with his version of freedom of speech.  Next, he poses a question of whether or not his music is hateful or actually encouraging to the spirit.  Now of course the casual listener is going to say, “Eminem is definitely hateful and bringing forth bad things on our kids.”  There is a lot of truth there, but at the same time, the listeners of Eminem (or insert any other rapper) can help people identify with the pain they are going through.  We do not know what it is like to be growing up in the slums and ghettos in America.  I’m not suggesting that Eminem is the type of person I would put on for my kids (if I had them), I’m simply stating that he actually can be a place of dispersing that rage that can be in so many young people.  The pain and identification with someone else who has had the experiences you’ve had can go a long way.  The problem is that it can also fuel that fire and push people to continue down a bad path.  That line is hard to walk, but I think that Eminem’s challenge of “take the plank out of your own eye” is a valid one.

The closing of this verse though is where the challenges really pour in to critics of “Shady”.  Critics say that he promotes drugs, doing ridiculous things with sex, and other immoral acts.  All of that is true, but first understand that his voice is much louder and respected than yours or mine is by his listeners.  Second, his rebuttal to these accusations is fair.  He simply says, “You make me sound so terrible for making money off of the things that YOU used to do when you were a kid (like smoking weed)”.  Then, he calls out those pointing the finger again and says, “You f**kin do-gooders – too bad you couldn’t do good at marriage!” Ouch.  Followers of Christ get divorced 50% of the time, just like everyone else.  And the fact of the matter is that most of his critics do not know what it was like for a young man to grow up in a terrible home in the slums of Detroit.  Yes, I am arguing right now for empathy for Marshall Mathers (Eminem), the same man who talks on his albums of doing some of the most ungodly things you can imagine.  If we understand where he is coming from, then we can begin the conversation.  Of course I’m not literally talking about the man that is Marshall Mathers, but instead all that he represents.  When we put ourselves in their shoes and see their life experiences, we begin to understand why they would say the things they do.  Heck, Eminem made millions in a decade and now can do whatever he wants, simply because he was “the best thing since [Elvis] Presley” (as he states in another single from the 90’s).  Controversy makes money.  Moving on…

[Eminem]
See I’m a poet to some, a regular modern day Shakespeare
Jesus Christ the King of these Latter Day Saints here
To shatter the picture in which of that as they paint me as
a monger of hate, and Satan, a scatter-brained atheist
But that ain’t the case, see it’s a matter of taste
We as a people decide if Shady’s as bad as they say he is
Or is he the latter – a gateway to escape?
Media scapegoat, who they can be mad at today
See it’s easy as cake, simple as whistlin’ Dixie
while I’m wavin the pistol at sixty Christians against me
Go to war with the Mormons, take a bath with the Catholics
in holy water – no wonder they try to hold me under longer
I’m a motherf**kin spiteful, delightful, eyeful
The new Ice Cube – motherf**kers hate to like you
What did I do? (huh?) I’m just a kid from the gutter
makin this butter off these bloodsuckers, cause I’m a muh’f**kin RENEGADE!

Yikes again! Again, many Christians may simply write off the words of Eminem, but his conclusion that he is simply making money “off these bloodsuckers” (i.e. those attacking him), is correct.  What is one of the main reasons Eminem was able to raise to the heights he did? Because religious communities made such huge deals as to how terrible he was, giving him the exact type of publicity he was looking for.  This simply made him more and more attractive to the rebellious side of young people and gave him more power.

So the question remains at the end of this.  This really has nothing to do with Eminem himself, but instead is a more foundational question.  What do we do with people who are creating success off of ungodly things and their success is amplified when we stand up against it? We have to make boundaries, but how do we actually draw these lines in the sand?