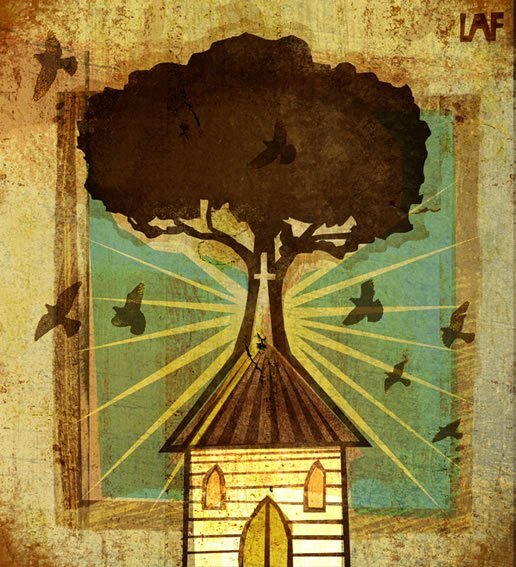 Ok.  I’ll admit it.  I am not a homosexual as people normally refer to with the “coming out of the closet”.  However, I am coming out and saying that I am part of the Emergent Church.  Sorry for the gimmick.

If you are a reader of mine, most of you will not even know what this means.  There are so many different theological expressions out there (traditionally and organizationally called denominations) that interpret the Bible much differently from one another.  The emergent church transcends denominational lines and is more about the manifestation of faith rather than an exact belief system.  The emergent church is defined in a book called, Emerging Churches: Creating Christian Community in Postmodern Cultures by Eddie Gibbs and Ryan Bolger, (Baker Academic, 2005) as follows:

“Emerging churches are communities that practice the way of Jesus within postmodern cultures. This definition encompasses nine practices. Emerging churches (1) identify with the life of Jesus, (2) transform the secular realm, and (3) live highly communal lives. Because of these three activities, they (4) welcome the stranger, (5) serve with generosity, (6) participate as producers, (7) create as created beings, (8) lead as a body, and (9) take part in spiritual activities.”

Now, this definition is obviously for a church and not an individual, but it is easy to translate into a single-person context.  There are many names associated with the Emerging movement, but the ones I have come across thus far that have greatly influenced my faith include Rob Bell, Tony Jones, Scot McKnight, Dan Kimball, Shawn Anthony (my pastor), and Brian McLaren. There have been many debates as to the different streams of the Emerging church, as well as differentiating between the emerging and emergent church.  I will not get into that, but if you are interested, google it. ☺

So, the two things I want to address are why I am claiming to be a part of this and why it matters.  First, I am constantly trying to think about how to be a Christian in a postmodern society.  I draw truth not only from the Bible and the words of Jesus, but also from all kinds of teachers from any faith background.  In addition, I learn from the people around me.  A big piece of the Emerging church is this type of learning style, which also includes trying to deconstruct the elements of your faith that have false-presuppositions and build them up with truth.  Yes…easier said than done.

Other focuses of the emerging church (which I am using synonymously with emergent for purposes of this article) that I have noticed include social activism, missional living, continual change, unstructured-ness, belief in Trinitarian values, a focus on the poor and how to stop injustices, avoiding sharing the Gospel in hostile ways, authenticity, a shift from religion to increased spirituality (including elements of mysticism), increased use of technology, house churches, lack of organization, and unorthodox theology.

Because of all these different characteristics, it is hard to nail down exactly what is meant by all of these things, as one of the characteristics is continual change and growth from the world around us.  The community I am a part of is a relatively new emerging church in the city of Lancaster called Inner Metro Green.  I have grown a lot from the different types of thinkers there, with services being structured somewhat differently than your typical mainline-Protestant church.  Another main piece is that the growing takes place somewhat on Sunday morning, but so much more happens throughout the week.  Whether this is serving the poor together or sending links to a story that makes someone think about how to become a better Christ-follower, the discussion and growth is constant.

So the characteristics I listed above resonate huge for me.  I am passionate about engaging our culture the way it is, not running from the “rampant sin in the world” (or something along those lines).  When I hear of things like sexual slavery for young kids in a foreign country or people not being able to put food on their table and the small sacrifices I can make, that resonates with me.  It definitely rings much louder for me than deciding if I subscribe to a certain theologian.  Also, I so often see Christians trying to go tell others the truth that they have in a nice little box, including a pre-set plan of how they are going to convince a “non-believer” to believe what they are going to believe.  This, my friends, is terrible.  Well intentioned, but terrible.  Christians are so convinced that they know all about the truth. Yes, I believe that salvation comes through faith in Christ.  However, we can be learning just as much from someone who has a different set of faith values than shoving our own agenda on someone.  I hope I’m making sense.

Another characteristic of the emergent church is using exaggerated rhetoric.  Emergents are constantly challenging what has always been.  Brian McLaren says in his book, “”Often I don’t think Jesus would be caught dead as a Christian, were he physically here today…”.  He goes on to say this is an exaggeration, but the comment is still thrown out there to start discussion.  Sometimes this is just plain annoying to watch and listen to, but often times there is a lot of fruit that comes from it.  Heck, I even posted that this was my “coming out of the closet”, which is one way you may have stumbled upon this.  If I titled it, “My theological expressions” I wouldn’t have gotten half as many clicks.  Maybe emergents are marketers.

Although the emergent church can be known for throwing away a lot of traditions, there is still an emphasis on the sacred and ritual.  Logistically speaking, your worship is simple and if I had to put a genre label on it, it would be indie.  Here are more thoughts from Scot McKnight who blogs for beliefnet: “Some emerging Christians see churches with pulpits in the center of a hall-like room with hard, wooden pews lined up in neat rows, and they wonder if there is another way to express—theologically, aesthetically, and anthropologically—what we do when we gather. They ask these sorts of questions: Is the sermon the most important thing on Sunday morning? If we sat in a circle would we foster a different theology and praxis? If we lit incense, would we practice our prayers differently? If we put the preacher on the same level as the congregation, would we create a clearer sense of the priesthood of all believers? If we acted out what we believe, would we encounter more emphatically the Incarnation?”

Yes.  This is exactly how my brain works.  I look at things we are doing and think, “That is not bad, but I know we could do it so much better.”

Continuing on, Emergents believe in Orthopraxy.  Orthopraxy puts an emphasis on how a person lives rather than what he or she believes.  Emergents do not believe that you can earn your way to heaven, but will quote people like Jesus’ brother James when he says in his book that “Faith without works is dead.”  This is a huge reason I am emergent.  When I look at the lives of emergents, they are sincere and authentic and they actually do the things Jesus talked about: serving the “lowest of the lows”.  Also, emergents believe that we are all constantly working as part of God’s story of redemption at work.  God did not give us a systematic theology.  Instead, there is “no language…capable of capturing the Absolute Truth who alone is God” (McKnight).

Now, some emerging Christians will say that it does not matter what religion one subscribes to, as long as one loves God and one’s neighbor as one’s self.  This can get sticky, but emergents will ask questions like, “so if I never say Jesus and live in another nation, but trust in God and am in community with Him, am I saved?”  Luckily I don’t claim to be a theologian, so I don’t have to answer those grey questions.  However, as my pastor pointed out recently in his series of sermons, the place we find God is in the ambiguous and grey.  True.  This is where true faith must take place.

Finally, emerging Christians hate the Religious Right.  To say that this resounds with me is an understatement.  As terrible as it is to say, I do not miss Jerry Falwell at all.  His loud, ridiculous political voice has turned so many away from Christ it sickens me.  The emerging church could be the very thing that crushes the Religious Right’s power and I’m all about that.  I refuse to make this post/conversation about politics, but thought that I would add this common characteristic of emergents.

Problems:
One problem with emergents is that they can become apathetic towards church and become very critical of others who do not do things the way they do.  Again, this can be a drawback of any community, but I know that sometimes emergents feel like they are alone and need to shout at others in order to be heard.  Sometimes in this loud world, they are correct, but their criticism can also be a drawback.  Does this describe Sig?  Um…yes.

Some emerging Christians can be universalists, meaning that all religions lead to Heaven.  I do believe that being a Christian is more than just saying a prayer one time to “accept Jesus into your heart”, but I also believe that Jesus meant when he said, “I am the way, the truth, and the life.  You can’t come to the Father except through me.”

In conclusion, this is important to investigate for every person looking to learn more about where the truth is in this world.  I know that sometimes it can seem like this whole Christianity deal is a big joke, but it is legit.  I know that those of us who claim to be followers of Christ are often the very reason you (or others) do not want anything to do with it.  But there is truth in that sacred book and there are people honestly trying to follow Jesus’ words.  These thinking people are called emergents.

Thanks to Scot McKnight/ChristianityToday for most of the research I used in this article and Josh Furnal for the pic.