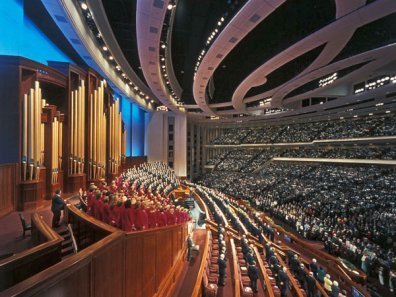 Back at the start of this blog, I wrote a post called “Oh The Mega Church”.  As I re-read this post less than a year and a half later, I am slightly embarrassed.  I’ve wanted to remove it for quite some time, but the point of this blog is to journey together, and to see progress.  This includes the places I’m right and the places I’m wrong.  God has restored a lot of things in my life and part of that is my view of church, and even the mega church.  Through frequently listening to mega church leaders like Andy Stanley, Rob Bell, Francis Chan, Tim Keller, Craig Groeschel, Bill Hybels, Pete Wilson, etc. and seeing a lot of positive change come from these mega churches, my views are much different.  Most of my favorite thinkers and practioners in the church today…are at mega churches.

Is it the flavor of church for me? Nope. But that doesn’t mean I need to be a hater either.

I remember learning in school that if a character in literature doesn’t make growth or demonstrate changes throughout the story then he or she is considered to be a static character. This is a negative trait, because it shows that the person is not allowing life experiences and perspectives to shape them at all. They aren’t open to reality changing what they’ve decided is an acceptable framework for life.

I read Jonathan’s post about Mega Churches when he put it up a while ago; I read it because I love him, not because I know anything about Mega Churches. When I met Jonathan I liked to listen to his thoughts about organized church and faith. I still really like to hear how he processes these subjects, but the tone and content of the conversation has shifted. Jonathan never had a critical spirit towards people, but in the last year and a half he has allowed his experiences at Manor, Inner Metro and Calvary Assembly to re-shape the way he viewed and interacted with the organized church. I see it as one of the highest compliments to be given–that someone is humble enough to allow for the reality of people and God to alter their previous observations. Jonathan is so open to new ideas and so enjoys honest conversation that he called me last night, all excited, to read me Susan’s response to his blog post about Mega Churches. He just kept reiterating how exciting her ideas were and how freshly she presented them.

Jonathan’s on a journey with church, same as the rest of us, although his is a bit more involved and has more history than most of us. But what I admire the most is how he expressed his thoughts and then allowed life experiences, direction from God, and thoughtful conversations with other people like Susan to continue to shape him. So he’s posting Susan’s comments, in the hopes that it can be a part of your processing as well. Like she points out, no church is perfect. But then again, neither am I. I’m glad for the company on the journey.

As I sit here reading through your blog about Mega-churches and their roles and responsibility to our culture here and outside our own culture I was thinking thru my own personal role to “here” and “there.”  I have sat in your shoes – I think scoffing might be a better word for how I felt about mega churches.  The ironic part of that is here I am at 38 years old not only attending a mega church but actually working at one.  There are a couple of thoughts I had (and I’m not passing judgment on your thoughts – these are simply my own and a compilation of many other people’s thoughts that I’m going to “use”).

Lights, Camera, Action – This is one of those “business” versus “spiritual” areas that seem to get lost in translation and ultimately cause many rifts in the arena of small churches vs. mega churches.  I certainly can’t speak for other mega churches and probably don’t have the right to speak for Kensington, but I’m going to attempt to.  For many people, the only way they will enter a church building is if they are mildly entertained – this is the culture we have become.  I don’t think we (meaning the mega church) subscribe to the philosophy that we should get people to Jesus by any means possible.  However, I do believe that we have to be culturally relevant.  Look at reality shows and tv shows that succeed?  What are the common denominators?  Lights, camera, Action!  Yes, the draw is to “get ‘em in the door.”  The goal:  to have them become fully devoted followers of Jesus Christ.  This is true from 3 yr olds thru 60 year olds.  I would spend a million dollars if it meant that 1 person became a fully devoted follower of Jesus.  I think Jesus understands this.  We have the ability to reach those who would NEVER set foot in church simply because we are offering “entertainment.”  Yes, many messages seem recycled and sometimes “predictable.”  But, for the hundreds that have never heard this message, it is refreshing for them.  Granted, over 50% of the population at Kensington has a Catholic background – so putting application behind the bible is a BRAND NEW concept.  And, for all intensive purposes, my Baptist background rarely gave me insight as to the WHY we do things – only the obedience, hell and damnation portion.  So, let the 6-8 cameras walk by, let the elephant walk on the stage – if this is what it takes for someone to ask “who is Jesus” – count me in!  Yes, Jesus can work without all the bells & whistles, but I’m a firm believer that he gave us these awesome tools to speak to our current culture.  I also believe that sometimes Jesus used drastic measures to reach people (drastic might not be the right word – but think about walking on water, culturally relevant parables).  We live in a very wealthy culture – we can use these awesome resources to advance God’s kingdom.

From baby’s to leaders: There is nothing that is going to happen by having people come once a week for an hour spiritually.  The question is what are they going to do in-between each of those days?  Kensington has always subscribed to the philosophy that each Christian should become a self-feeder.  Kensington will not bottle feed you. They will provide the tools and means, but ultimately each person must make the conscious decision to follow & love Jesus, become a part of a church community (even if it isn’t Kensington) and ultimately give…the 3 “L’s” of church are:  Love God, Love others, Lock Arms (small groups), Live open-handedly with your time and talents – in that order.

Small groups: There is a high value placed on small groups – this is where real community happens.  You can’t attend church for very long without hearing about, knowing about small groups.  This is the heart of the church.  This is where groups meet, study the Bible, worship in music together, go out and serve in the community TOGETHER!  I would venture to say – small groups are the heart of Kensington.  Small groups have ZERO bells and whistles (no lights, camera action 😉 ).  They meet in homes, restaurants, bars etc…there are family small groups, motorcycle small groups, divorce recovery small groups, etc…the list goes on and on.  Literally, there is a small group for everyone – no matter the stage in life.  I would venture to say, many small churches (and I’ve attended a LOT of them) don’t offer this opportunity.  Small groups are where LIFE happens with Jesus.  Small groups hold each member accountable to each other.  Are you praying, are you worshiping, are you serving, are you loving your spouse, your children, are you going to give to the church so that another well in Africa can be built.  What about that hospital in India, what if we went there as a small group?  Let’s go to West Virginia and build a school!  Again, I’m only speaking about Kensington!

Where does the money go:  let me say this, we just did a capital campaign and more money was given to “there” (Africa, India and beyond) than what has been used at here (Michigan).  Instead of building a new church (which, to some, is desperately needed and have been pretty upset that this hasn’t happened), the hospital in India was built.  Instead of upgrading old video/lighting equipment 1000 wells were built in Africa.  Team after team has flown down to Haiti, Louisiana, Sri Lanka, (and the list goes on) with their own money to help and aid those in dire need.  These people are newer followers of Jesus.  These people, 5 years ago, would have never considered going to these places prior to Kensington.  They never saw outside of their job, family or sport.  These people shouldn’t need the Lights, Camera, Action!  Believe me, Kensington is not the “church of all churches.”  They make mistakes – all churches do.  But I don’t question the goal.  Every decision is prayed on, meditated on and brought before the elders of the church.  No dollar is unaccounted for.  I don’t always agree with the decision, but ultimately I never will.  To judge (hate that word, but can’t think of another word right now) that these churches are poor stewards is completely inaccurate and causes rifts and finger-pointing.  Christ didn’t come just for the poor – he came for EVERYONE!  He spoke to who needed HIM – we all need Him.  Ultimately, these rich people are funding the hospital in India, the wells in Africa, the school in Haiti, the church plant in downtown Detroit, the orphanage in Russia.  God gave them the blessing of money.  Many of these same wealthy people who shouldn’t need the bells &amp; whistles are the ones who have the ability to give WAY beyond what we can possibly fathom.  We are all called to be a part of the church – spiritual gifts (giving is one of them).  I firmly believe that Kensington is just a part of the church not THE church.

God calls certain people and churches to go and be different places.  I never judge the small church that has had the same members for 50 years.  Why?  Because these people NEED this church – God has called these people to be in and at THAT church.  I know that God has placed me at Kensington for a very specific purpose.  Yes, Kensington has made a million mistakes and will continue to do so, but ultimately, I know that their goal is to reach middle class Americans and have them become full devoted followers of Jesus.  Let me also close with this.  I know my role, and am working within my spiritual gifts.  It took me until I was 30 years old to really know what that was and what God was asking me to do.  Kensington was a huge part of that.  I grew up in the church – I “knew” all this stuff, yet it wasn’t until I started attending and participating in Kensington that I understood my responsibility to Jesus and the world I live in.  No, I can’t give money.  But, there are people are can’t give administratively or teach like I can – lol.  I know that I may never go to Africa or India.  But I now how to teach a 7 year old that Jesus loves them and wants to be a part of their life.  I know how to take a Bible story and tell it in an age appropriate way to a 10 yr old boy.  And yes, sometimes it takes money to do this.

And the same Jesus we love indeed.

Thoughts from those who read through this?