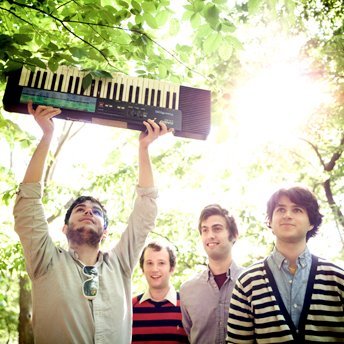 Vampire Weekend is the very essence of great indie music.  Their self titled album, Vampire Weekend, was a huge success with nearly 500,00 record sales and if there was one album I’d been looking forward to with the new year, it was their new record. With their second album released this week, Vampire Weekend is proving that they are not just a band that makes one good CD and then fall off the map.  Instead, their latest album, Contra, will likely debut at #1 on the charts and the New York City hipster band continues to gain momentum.  If you are not an indie elitist (don’t worry, I’m not either), the sound may take a bit to grow on you, but I feel like it is the perfect album to have on in the background while plowing through emails at work.  The unique sounds and creative melodies make for a relaxing and uplifting listen. I want to write so badly, “I guarantee you’ll like it”, so I think I will throw out that empty promise.

Plus, Christian Lander, creator of the sarcastic Stuff White People Like website, said in an interview with Salon.com that Vampire Weekend is “the whitest band” alive.  Perfect.

**Caution: Some of their lyrics are not appropriate for young people, but for the most part their lyrics are not discernable.  I’ve listened to their albums on repeat for a long time and I actually never realized there are a few swear words in their music until after I wrote this post recommending the band.  It’s a great listen, so don’t worry about reading their lyrics if swearing offends you and you won’t even hear it.  Or, just skip this weeks recommendation and rock out to CCM. Nothing wrong with that.

Myspace (recommended to stream and hear their sound)