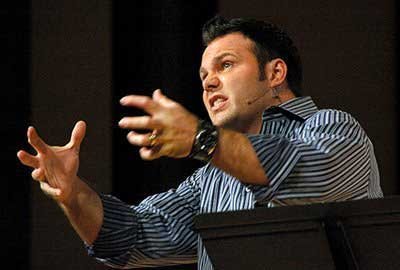 I’ve been tossing around this concept in my head for a few weeks now and don’t have a clear answer.  How do rational, objective-thinking Christians distance themselves from other preachers that have a large reach, but whose faith looks completely different from theirs? Do we just let it go and live our own lives and let our actions speak for themselves?  Before we can answer this, I suppose, is to ask why anyone would need to distance themselves from another Christian.

Let me start with a story.  My wife was in a natural, non-threatening conversation with a co-worker about faith.  Her friend, who hasn’t been to church in years (but is interested in spirituality), had only seen Joel Osteen on TV and assumed that my wife went to a smaller version of his church.  “I thought they were all basically the same” her friend said.  And her assessment was that Joel Osteen was making some basic, common-sense evaluations and made the assumption that Christians don’t really critically think.

Now I’m definitely not here to take shots at Osteen. I did that once and felt guilty about it.  But the truth is the Gospel takes a much different manifestation in my life than the way he talks about it.  And way more important than my personal differences from Osteen, is that the unchurched have a whole set of presumptions about us Jesus-followers.  Without recognizing these presumptions, it is difficult to have a faith conversation with someone who has different views.  Research shows that people who do not believe in Jesus associate Christians with being hypocritical, anti-gay, sheltered, too political, and judgmental (87% of people according to Barna).  Not the best of lists when talking about an inspiring faith, and honestly is not really something I’m interested in being a part of.

And when I talk about distancing myself from other Christians, I don’t just mean someone like Terry Jones, the man who became famous for his Qu’ran burning threats on September 11th.  I don’t think non-believers assume most Christ followers are that off the mark.  But I do mean Christian leaders whose faith looks so radically different from mine (or yours), but are still largely popular in the evangelical community.

Allow me to use the example of Mark Driscoll.  I know, I know.  Most people in our Christian subculture have a strong opinion of the man, positive or negative.  Mark is a guy who is quickly becoming the leading evangelical voice, but much of what he says drives me crazy.  Like when he talks about being a “Macho Man” Christian and how “there’s nothing holier than two men beating each other in a cage fight”. Or when he called 5 people up on stage at a conference and told them to punch him in the face.  “Man up! I’m serious!” Mark said.  When the other men didn’t punch him, he had them kicked out of the conference for being sissies.

Or when he did a sermon on the heresy of “The Shack” (which is a fictional book). Or that he would use church discipline on men who decide to be stay-at-home fathers (How is his wife allowed to speak in church if he is taking everything literally and not in context?). Or how he does a sermon on the fallacies of Rob Bell’s theology.  Or that all yoga is evil. Or Avatar is the most demonic movie of all time.  Or his low view of women.  Or his arrogant-vibe.  Or his use of language. 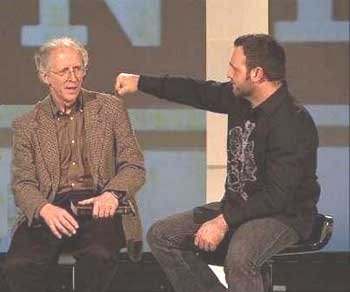 And I don’t mean to single out Driscoll.  In fact, I agree with tons of his content and appreciate the Acts29 Network (especially the Rochester chapter).  I think he does a lot of good.  It’s just combined with a bit of crazy.  And I also know that Mark likes to utilize controversy to magnify his platform, but people read TIME magazine and see that his theology is in the “Top 10 Ideas That Are Changing the World”.  And I’m not sure that God’s holiness requires me to fight other men (see “Prince of Peace”).  But I’m lumped into this category with Driscoll when I believe in the cross.

But there is this line that can easily be crossed. We as Christians who desire to distance ourselves from other Christians can end up talking so bad about other Christian leaders that it ends up making us look like we beat each other up.  Like those previous paragraphs.  Did I end up just causing more disagreements among Christians that don’t really matter?  Because that’s definitely not my goal.

And Lord knows we as Christians get enough criticism from non-followers of Jesus without criticizing each other.  But I don’t want to be in certain camps, either.

And therein lies the tension.

So what do you think?  How do we distance ourselves from other Christians? Is it worth our time? When does it become hurtful to the Kingdom?